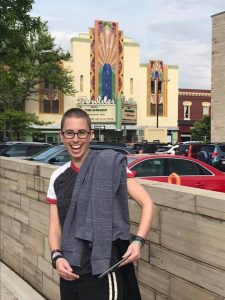 If you attended a Todd Rundgren concert in the past year, chances are excellent that Lizzy Goldstein was there.

Lizzy became a familiar face in the Rundgren fan universe as she traveled from show to show, volunteering for his Spirit of Harmony Foundation along the way. While she is a relatively recent convert to the Rundgren fandom, she is no less devoted.

“In 2017, I had a friend who was working on Ringo Starr’s tour, so I went to see the show and although I’d never heard of this Todd Rundgren guy, I thought he was the best part of the whole show. (The song) ‘Love is the Answer’ completely captivated me. I started checking out more of his music, went to a couple of concerts on the White Knight tour and was hooked.”

Lizzy is an avid devotee of live music and enjoys taking the opportunity to travel to shows.

“I love traveling and I love live music. Following a tour is so much fun for me. I first did it in 2008 with Bruce Springsteen and it’s hard to explain, but it’s probably the most freeing feeling in the world to me,” she said. “There is just something about the excitement of visiting a new and different place along with the familiarity of seeing the same band in each location.”

Todd Rundgren’s 2019 tour, ‘The Individualist’, happened at a pivotal time in Lizzy’s life. 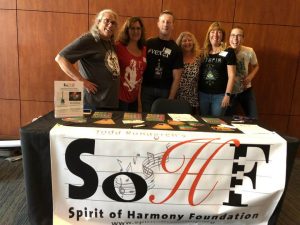 “This tour came at a time when I was at a personal crossroads/plateau (as Todd would say). I quit my office job in mid-May and thought one month on the road would be a great way to hit the reset button, as it were. One of the most interesting parts of my travels was seeing so many different and often historic theaters. For instance, the house manager in Iowa City told me all about the ghosts haunting the theater (maybe one of them set off the fire alarm during ‘Born to Synthesize’?). Another fan told me about seeing Utopia on the Ra tour at the Taft Theater in Cincinnati (a very cool venue where I would have been caught in a massive thunderstorm if I hadn’t arrived early to volunteer).”

Lizzy joined other Spirit of Harmony Foundation volunteers at The Individualist tour stops, helping staff the foundation information table and managing the iPad used to record fan questions that Todd Rundgren would preview and answer during the second half of each show. Followers of Spirit of Harmony Foundation’s social media pages anticipated seeing Lizzy’s picture at each tour posting. One follower, impressed by Lizzy’s infectious enthusiasm, deemed her ‘my hero.’ 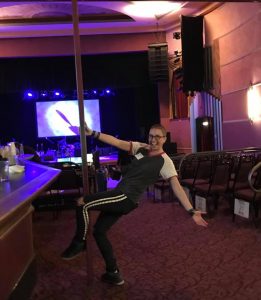 For her part, Lizzy says she simply enjoys the chance to interact with other fans and spread the word about music education.

“I first became aware of Spirit of Harmony Foundation through the ‘Big Weekend’ event last September. Since it was in the Midwest, it was a great opportunity to meet new Todd fans from both coasts and really become a part of the global community. I ran into (Spirit of Harmony Foundation Executive Director) Jean Lachowicz in Boston on The Individualist tour and she told me they needed additional volunteers in Toronto. I was like, ‘Ok, fine; I’ll help.’ I had the best time volunteering in Toronto, so I offered my services for the second leg of the tour as well. I had so much fun talking to other fans –whether it was hearing Todd stories from the ’70s or convincing people to overcome their shyness and record a question for Todd,” Lizzy said.

She believes in the importance of music education for children; the advocacy work of the Spirit of Harmony Foundation. 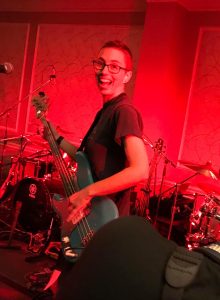 “Growing up, I was fortunate to attend schools with great music/performing arts programs. My mom is an artist and dabbled a little in music, so she also encouraged my artistic expression. My favorite class period in high school was chorus. I definitely didn’t have a gift for music, but I loved being able to take a break from the monotony of my academic classes and exercise a different part of my brain. It was a class where I didn’t have to worry about test scores or boring readings. I think music education is so important for fostering creativity, individualism and just generally making the world a more colorful and interesting place.”

As an adult, Lizzy recently took up playing the bass.

“I’ve only been playing bass for a little over one year,” she said. “I took piano lessons as a kid, but as I grew up, I kind of convinced myself I wasn’t a musician. It was actually the Todd Rundgren fan community that inspired me to try again. There’s so much creativity, music and otherwise, among Todd’s fans and I wanted to be a part of it.”

“I’ve always loved the bass (Paul McCartney was my first love, at age 8, and I think most people know I’m a huge Kasim Sulton fan), so I figured why not give it a try? I really have to credit the friends I’ve made through Todd for giving me the drive to participate in the Fan Band at Toddstock West and most recently with She-Ra. It’s such a supportive TRibe.” 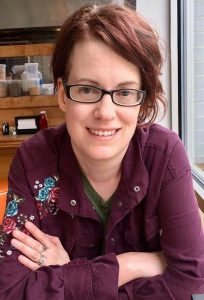